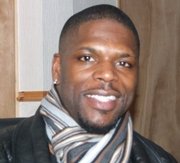 MEDIA UNITED at www.mediaunited.co.uk is a developing BUC resource. Can you add to any of the following?

My name is Mark Prince. I was born 10th March 1969, the 3rd child of Clarence and Marva Prince. When I was 12 months we moved from Finsbury Park to Wood Green after I caused a fire and ruined our home. No one was hurt thank God. Growing up with two brothers and a sister was fun and I remember even though we didn’t have much money we were happy. Like any family we had our problems and having experienced a turbulent relationship with my Dad I decided to run away from home and was homeless at aged 15. I had dreams and aspirations but no direction. I got involved in a criminal lifestyle believing I could make lots of money and enjoy a better life for myself, Tracy and my kids (Tannisa and Kiyan at that time). By the age of 21 I woke up to the reality of my situation and where my choices were going to eventually lead me. I wanted to be a good Dad and didn’t want to risk not seeing my kids. I wanted to achieve more in my life because I believed in myself deep down and realised this life style of easy money was appealing but had no future and security. It was very unpredictable, risky and would eventually prevent me from the happy secure life I had dreamt of for myself and my family. I decided I wanted to be a boxer. My Dad used to box and was a light heavyweight champion in Guyana. He used to take me and my brothers running with him and teach us boxing skills at home. I never thought I would be a boxer one day. I trained hard for 9 months, changed my lifestyle, my diet and I became more disciplined. In 1992 I began my amateur career and won my 1st 4fights and even though I was still considered a novice I was confident in my ability and decided to enter in the ABA (Amateur Boxing Association) competition, which is where amateur boxers compete to find the best fighters in England. I stopped all my opponents winning the North West Division and London titles before being beaten in the semi-finals. I made a huge impact on the boxing scene by now because I had beaten seasoned amateurs who were ranked in the top five! I had nine fights as an amateur boxer and won eight, knocking out 7. I then turned professional in 1993 and signed a 5 year contract with Frank Warren in 1995. I won 2 international belts; the World Boxing Organisation (WBO) and International Boxing Federation (IBF), before I fought for the World Title in September 1998. I lost my first fight out of 19 against a great champion; Darius Michalchowski, who was unbeaten in 36 fights at the time. My record stood at 19 wins; 15 knockouts and 1 loss, when I sustained a terrible injury to my knee in 2000, preventing me from fighting again. I felt frustrated, depressed and lost with no plans for the future. Doing various types of jobs to make ends meet I was searching for something I belonged to so I decided to start voluntary youth work. I wanted to help young people struggling to navigate their way through life and reach their full potential. I was told by the young people and professionals about the positive impact I was having while doing this work. It brought about a feeling I never experienced in the ring and I knew this was to be my new career. I found my biggest opponents in life were life’s challenges; my 4th son was stillborn and my Mother nearly died with a blood clot to the brain, which left her unable to walk for a year. Then came the tragic loss of my son Kiyan who was a talented football striker and had a contract with QPR and a promising future ahead of him. He was stabbed to death outside his school as he peaceable broke up a fight, a knife was drawn out on him, he asked the pupil to put the knife away and turned to walk away, he was jumped on and stabbed several times, with one fatal stab wound to the heart... killing him. Five months after Kiyan was taken, my Dad unexpectedly died. I knew my relationship with God was what saved me from giving up or going crazy or topping myself. I decided to use my grief positively and worked tirelessly to raise awareness of the terrible impact carrying and using knives is having on families in our communities and the future of our children. I am now a public and motivational speaker and the Founder of The Kiyan Prince Foundation. I speak out against gang culture, against knife crime. I have done interviews with all national TV stations, talk shows, various schools in and out of London. I was presented with the Childrens Champion award by Priminister Gordon Brown for the work i am doing with young people in 2008. I am passionate about helping people to make positive choices in life and believe we are all responsible for bringing up our youths so we need to model what we expect of them. I go wherever young people are; schools, referral units, prisons, etc to share my pain and inspire others to value their lives and live productively. I have also: - filmed a documentary for ITV called “Put the Knives and Guns down” - been a panellist at the NBCPA National Black Crown Prosecutors Association annual conference - been a panellist for The News Of The World 'Save our Streets' Campaign - been a motivational speaker for Trident event - Metropolitan Police and at: - Black Boys in Business – an entrepreneurial event

of 2 Next
This reply was deleted.